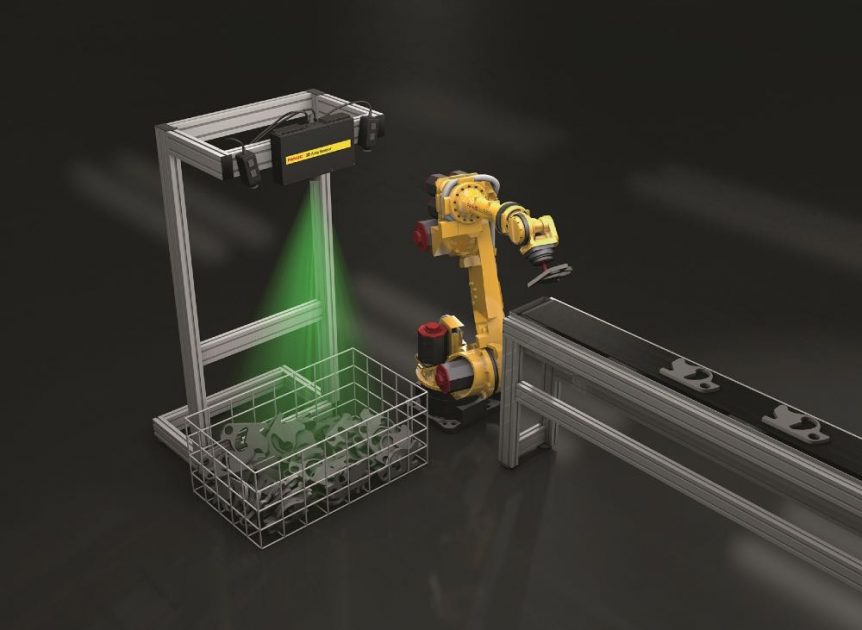 FANUC has expanded its range of integrated image processing solutions with the introduction of the 3DV/600 Vision Sensor.

The new sensor benefits from an extended field of vision in comparison to other models in the range, and is designed for use in multiple applications, including bin picking, feeding an assembly line, or stacking pallets. Complete with the 2D Camera Package, 3D Laser Sensor and 3D Area Sensor, the 3DV/600 forms part of a highly-integrated, high-performance portfolio for industrial image processing.

Andy Armstrong, Sales and Marketing Manager at FANUC UK, comments: “The 3DV/600 is a practical and user-friendly addition to the range, capable of being fitted permanently into a system, or temporarily on the last axis of a robot. The other models in the 3DV series have proved hugely popular, and by expanding its field of vision, we’ve ensured the 3DV/600 can deliver the high levels of performance demanded by ambitious manufacturers.”

Its high level of integration and very short image processing ensures that the 3DV/600 can be combined with the iRPickTool for use on a conveyor belt, able to pick up items even if they are irregular-shaped or have no clearly defined pick-up point.

The 3DV/600 is pre-calibrated, which makes installation as straightforward as possible. After the sensor is installed, the robot simply has to identify the position of its ‘eyes’, and a setup-wizard supports and guides you through the necessary settings. Furthermore, no interface development is needed, as the FANUC 3D Sensor support is fully integrated into the robot software.

Andy continues: “By fully integrating the 3DV/600 Vision Sensor, a huge amount of time is saved at both the installation and image capturing stage. The 3D-Snap-in-Motion function allows the robot to trigger the snapping of an image while in motion, which saves a lot of time and is something a non-integrated vision system would be unable to do.”

As with other sensors in the range, the 3DV/600 is equipped with blue LED lighting as standard and connected with a single cable – which reduces clutter and makes maintenance much easier for the end-user.

Andy concludes: “The 3DV/600 has been designed with the user in mind, designed to ensure it is as intuitive as possible. It’s integration and expanded field of vision make it an ideal addition to a range of FANUC robots.”